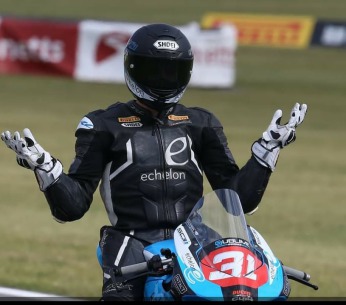 SCR have never failed to be ready for the season before!

Since November 2021 we had been living in some sort of dream land.  Except this dream actually turned into something of a nightmare.  We have experienced problems in racing over 13 years but this situation was to be disappointing all round.

Supporters may be aware we announced the terrible news of Sam’s TC diagnosis in November 2021 but through his treatment and bravery, testicular cancer eventually left his body, finally, in February 2022.  Getting the all clear was a massive step, just in time, to help gain some fitness back and get some early season testing started.

This episode was traumatic for Sam’s family and SCR race team and not the least, himself.  But he got through it and now enjoys good health again.  As life sometimes teaches us it is a brave man that disregards the risks of expecting everything to be rosy all of the time.  Whilst not expecting to get cancer at the age of 31 it is a fairly common ailment at this period of male life.  We are grateful he has survived and has returned to healthy life.

One week before this devasting news, also in November 2021, we had received an interesting offer to run with NP Racing in the 2022 BSB Superbike class.  As it happened this offer to race in the top class actually helped the mental process of recovery for Sam’s TC.  It gave him another reason to get through the tough chemo sessions and regain fitness in time to ride again. 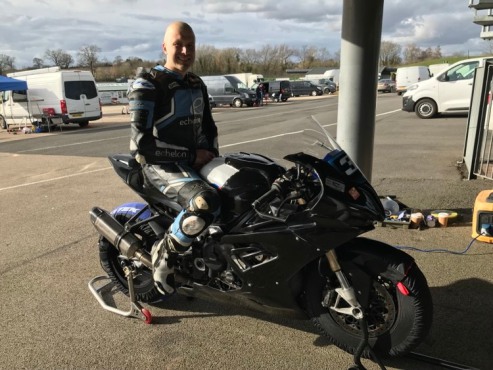 Finally to track at a Cold Mallory Park

By February 2022 we had already bought a BMW test bike from NP Racing and eventually tested it successfully at a cold Mallory park in early march.

The Mallory test showed that Sam’s recovery wasn’t complete fitness wise. Finding the energy to complete 12 minute sessions was, however, achieved.  This then left us with the prospect of getting fully ready for the first BSB test at Snetterton in April.  In the time left we had high hopes that NPR were going to complete the BMW superbike build, bring it to our launch night in April - the day before the Snetterton test - and then be ready for the good weather that had settled over the Norfolk plain for the opening test of the season. 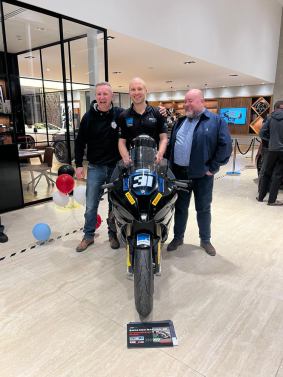 Unfortunately the Superbike didn’t make our planned and important launch night.  Our booking at the Aston Martin showroom in Hatfield had been a major SCR logistical success story, introduced to us by one of our long term sponsors Matt Baxter (Echelon) as an opportunity for valuable PR and getting our supporters and sponsors together prior to the big season long awaited.  Even without the superbike we still enjoyed many supporters and sponsors attending with a great blog interview recorded.

Travelling up to Snetterton circuit the next morning we had great expectations of a big day in the superbike class.  Can you imagine how a journeyman rider, in the game for so many years felt on such an exciting occasion?  Not only that but one who had just got through a life changing period of cancer recovery and put everything into getting fit again for this day to come?

By 10am the next day the circuit was open and dry.  It was cold but the odd bike crept out onto the track meaning it was time to go at last.  This first of three test days was an open pit lane situation meaning we could gain maximum testing time which was much needed for both new bike and recovering rider.

Technical issues stopped the whole process almost straight away.  The 2021 NPR superbike proved inoperative even with the attention of Neil Pearson for several hours and harboured an illusive electronic fault.  Other issues were resolved and finally Sam got to spin some laps in the early afternoon on the test ‘stock’ bike whilst awaiting a resolution of the issues affecting the 2021 superbike.

Several times the 2021 superbike was readied for track but each time it had an electronic fault at 12,000 rpm which couldn’t be resolved even with advice from the Motec engineer present.  By the end of the day, no laps were possible on either superbike.  A very frustrating experience for SCR.

Days two and three passed in a bit of a blur.  With three sessions of 30 mins each day the superbike class enjoyed further good weather but the only laps possible were on our own test bike which was thankfully allowed by Stuart Higgs the BSB Director.  Sam continued to spin useful laps on his own stock test bike but never got to ride the NPR 2021superbike more than an out and in lap to report it still had the same interfering electronic fault which sapped power and spark.  The snetterton test proved disappointing but Sam stilled managed to complete some useful laps throughout the weekend. We now looked forward to the Silverstone test in two weeks time.

At the beginning of the test week we were somewhat heartened to hear from NPR that the superbike had been rebuilt and successfully passed dyno tests ready for Silverstone.  Upon this news we paid to enter the two day test but could only expect to complete the first day as Sam had a personal event in Ireland starting on the second test day.

BSB Test day at Silverstone we attended early in the morning finding superbike waiting on its stand in the pit garage.  First laps were attempted but, yes you’ve guessed it, the same fault was again apparent.

We had the rest of the day to await some sort of resolution.  There was ongoing diagnosis by NP via the Motec system, consultations with others who know BMW bikes too but to no avail.  No significant laps on the Superbike were possible all day so we left deflated but knowing we had to make some difficult decisions to move forward again.

A really difficult, disappointing and expensive lesson has been learned here.  Up until now we have always built, developed and raced our own bikes and teams. SCR has developed good relationships with bike and engine builders, suspension engineers and advisors in the BSB paddock. Taking the step to share responsibility with other teams always has its risks both ways..  Goodness knows there are enough stories around the paddock of wholesale failures to warn the unwary.  On this occasion we convinced ourselves for a time that we could help develop the whole SCR/NPR team by adding logistical help and paddock support with a keen and experienced rider willing to do everything to help further develop into a successful Superbike team.

Unfortunately at this juncture we had to cut our losses and decided to pull out of our Superbike experience before the season got underway.  Clearly disappointing for all around including NPR, sponsors and our supporters.  Sam was very upset at losing what had become a career dream.

So what next?  First of all we have kept our great sponsors and supporters informed that we have decided to enter the BSB Stock 1000 class in 2022 as soon as our test bike is sold.   We have already found a good quality BMW for sale that has a good Stock 1000 spec and further news is coming of a tie up with a successful BSB Team who will provide us with quality technical support in the Superbike pitlane where we need to be.

Apologies for this length of explanation but you may realise the whole experience has been very difficult at times and speaking about it has been difficult.  Those who know, know our situation hasn’t been anything of our choosing.  We have done nothing wrong or could have done better.  Sam worked tirelessly to make this situation work and, set against the odds, really deserved a better outcome.  SCR and our supporters continue to work to get the season going again. We remain determined to put this behind us and move forward under our own auspices and selected new technical support.

In the next week or so we hope to get many of the logistical issues sorted so we can go testing again and eventually get back to racing.  The likelihood is that Brands Hatch GP is our first planned outing at BSB but testing track time will be required before then.

Thanks for your ongoing support.